A common criticism of target-date funds is that they tend to group investors by a single factor, usually age or its equivalent, the time remaining until the participant’s estimated retirement date. A fund’s glidepath is designed using some underlying principle, such as a life-cycle model designed to minimize tradeoffs between human capital and financial capital or sudden changes in participants’ consumption patterns.

Some TDF critics point out that while a glidepath may have the correct allocation for the average participant in an age group, there is actually no average participant. Income, retirement asset balances, risk tolerance and access to other retirement income sources such as pensions vary among participants and suggest that a more individualized glidepath would be optimal.

Here is a hypothetical example provided by PIMCO One 50 years of age with two scenarios that book the standard age based allotment. For context, an age-only approach would suggest 73.8% equity exposure, which falls between the two illustrated values. (PIMCO has published an interesting white paper on their glide path construction method which is available online.)

Arguments against TDFs that rely solely on age add credibility to the case of managed accounts in defined contribution plans. Managed accounts allow an advisor to create a customized portfolio for the participant that considers age and additional financial information to create a customized DC portfolio. A March 2021 report by Cerulli Associates concluded that “professional advice and investment management offered through a managed account could be critical to improving retirement preparation.”

Late last October PIMCO and Morningstar Investment Management LLC announced a collaboration with the myTDF program. According to the press release, MyTDF uses Morningstar Investment Management’s user interface and network of data integrations with Recordkeeper to allocate more individual investment allocations to individuals such as an individual’s age, salary, assets, savings rate and company match rate. factors will be included.

Rene Martel, Pimco’s managing director and head of retirement, said the DC market was being undervalued with a wide gap between off-the-shelf TDF and managed accounts. The goal of PIMCO was to develop an approach that is based on more individualization than just a participant’s age, but in a way that does not increase the complexity of the participants or the need for greater engagement. Additionally, the solution “must be offered at a cost that looks more like traditional target date funds than managed accounts,” Martel said. The firm eventually decided to do so by taking advantage of its existing target date range. 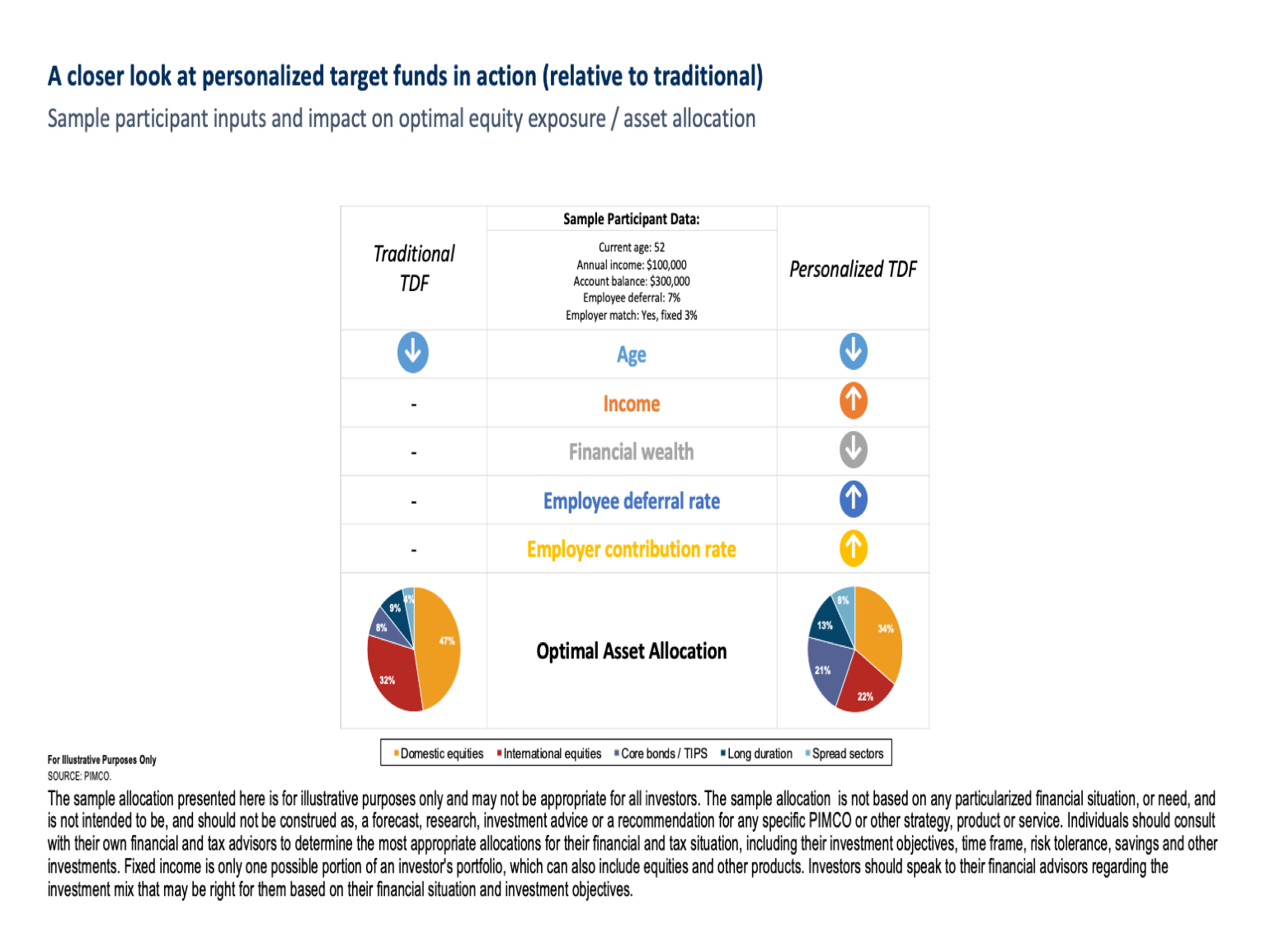 Increased personalization requires more participant data from Recordkeeper. Bransby Whitton, executive vice president and product strategist at PIMCO, explained that getting the data directly from each recordkeeper would require significant infrastructure work. That realization led to a collaboration with Morningstar Investment Management, which already had more than two dozen recordkeepers on its platform.

Dan Bruns, Head of Product Management with Morningstar Investment Management LLC, explains the mechanics of the myTDF program. “From time to time, the PIMCO myTDF Platform will obtain data about the Participant from the plan’s record keeper and use that data, in conjunction with PIMCO’s methodology, to determine whether the portfolio of the Target Date Vintage has multiple target- Personal for how to mix debt funds. Personal,” Bruns said. “myTDF then passes that allocation strategy to the record keeper and will implement it. Personal data used includes age, account balance, salary and total contribution rate. By expanding the data set beyond just age, myTDF targets a standard Can provide a more personalized investment strategy than up-to-date funds. MyTDF will then periodically receive updated personal data from the record keeper to ensure that investors are correctly allocated over time.

PIMCO’s RealPath Blend TDF Funds are the foundation of the program so participation in myTDF is limited to plans using those funds. “When we implement myTDF, we use exactly the same algorithm and optimization (as the RealPath Blend Fund),” Martel said. “The only difference is instead of feeding the market average data for the different data points that we pull from the record keeper and into the optimization feed into the actual participant data. We don’t have to create a whole new process and a new optimization or algorithm for this.” Thei- we are taking advantage of what is there, just making it more personal to each participant. So, in many aspects, it will look a lot like the current plan sponsors and their participants are now established, Martel said.

I was unable to find information on myTDF’s adoption rates or the level of interest from advisors and advisors until the deadline of this article. But it’s an interesting approach that may catch on with plan sponsors and other TDF-fund managers.