Is there any way to prepare for stagflation? Any actionable ideas?

Stagflation is an economic environment characterized by high inflation, high unemployment, and slow or negative economic growth. In other words, not fun.

It’s a risk that’s gaining steam among people who like to worry about things for a living.

Larry Summers (The Social Network guy) is one of those people who is constantly worried about things. Here’s his recent take:

The Fed’s current policy trajectory is likely to propel inflation, with both unemployment and inflation averaging over 5 percent over the next few years — and eventually leading to a major recession.

There are a lot of people who think the Fed is stuck right now. May be they are right.

It is possible that the Fed’s only option is to slow demand by raising interest rates and signaling that they will do so at the expense of economic growth. It is also true that inflation may not care about high interest rates if the supply chain remains disrupted and we end up with a lingering commodity crisis.

US has no precedent for stagflation

The 1970s is basically the only period that comes to mind.

Let’s review what happened in the disco decade.

Inflation was very high for most of the decade, averaging over 7% and rising to over 13% by the end of the 70s:

The unemployment rate was also relatively high, reaching 9% after the 1973–1974 recession and ending the decade at 6%: 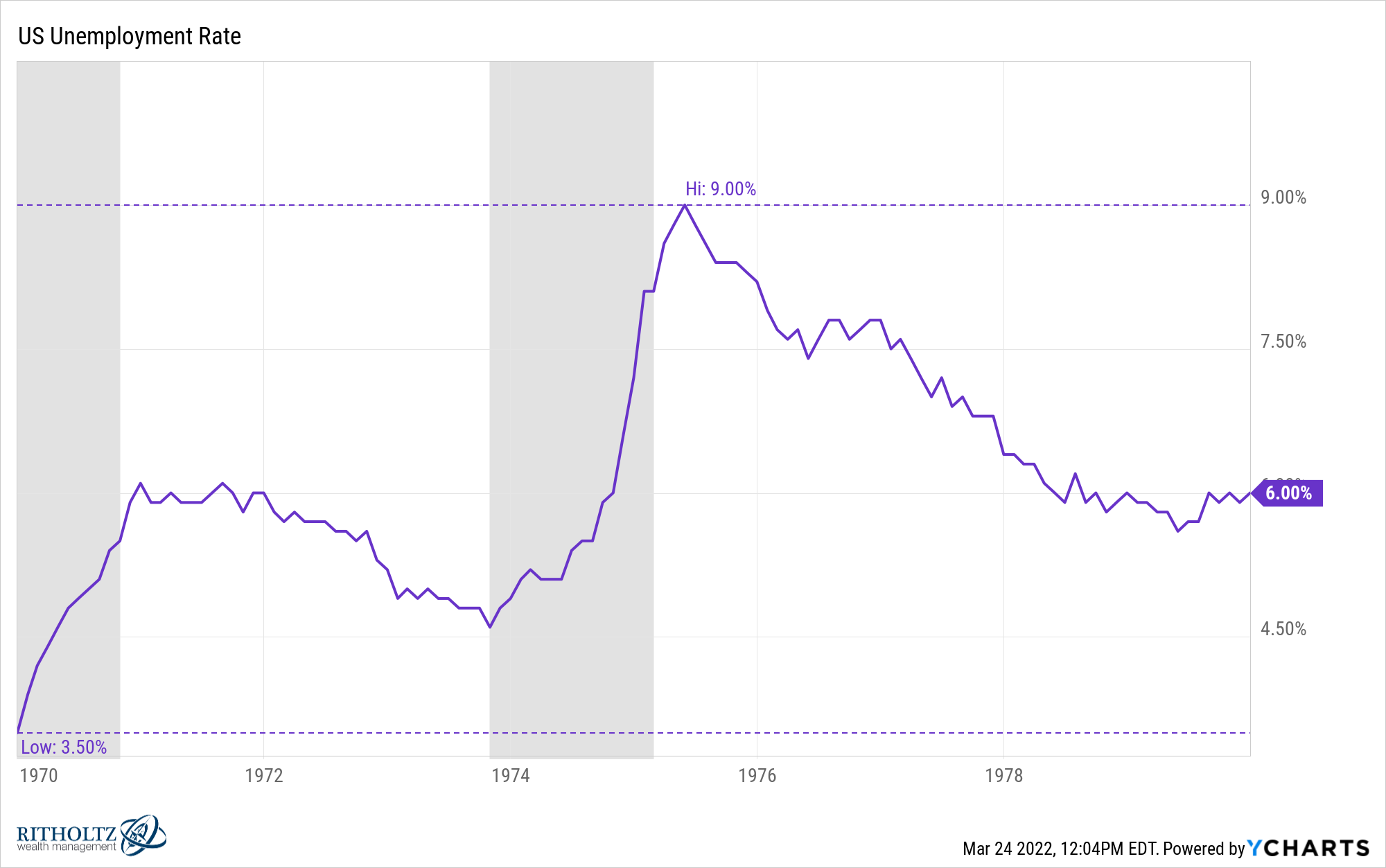 Real economic growth was probably better than most people at 3%, but I’m not sure that given how much people hate high inflation: 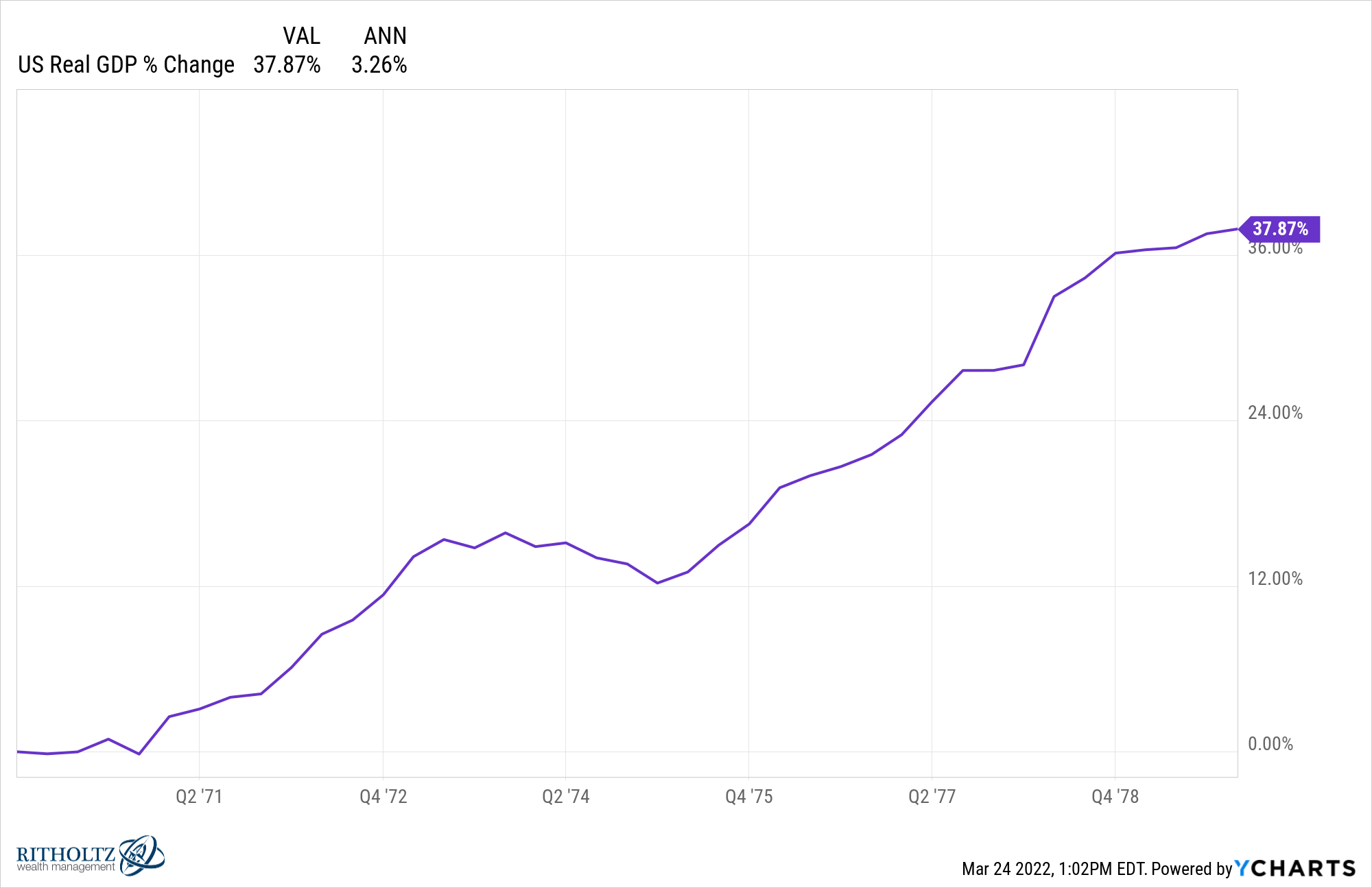 The biggest difference between then and now is interest rates: 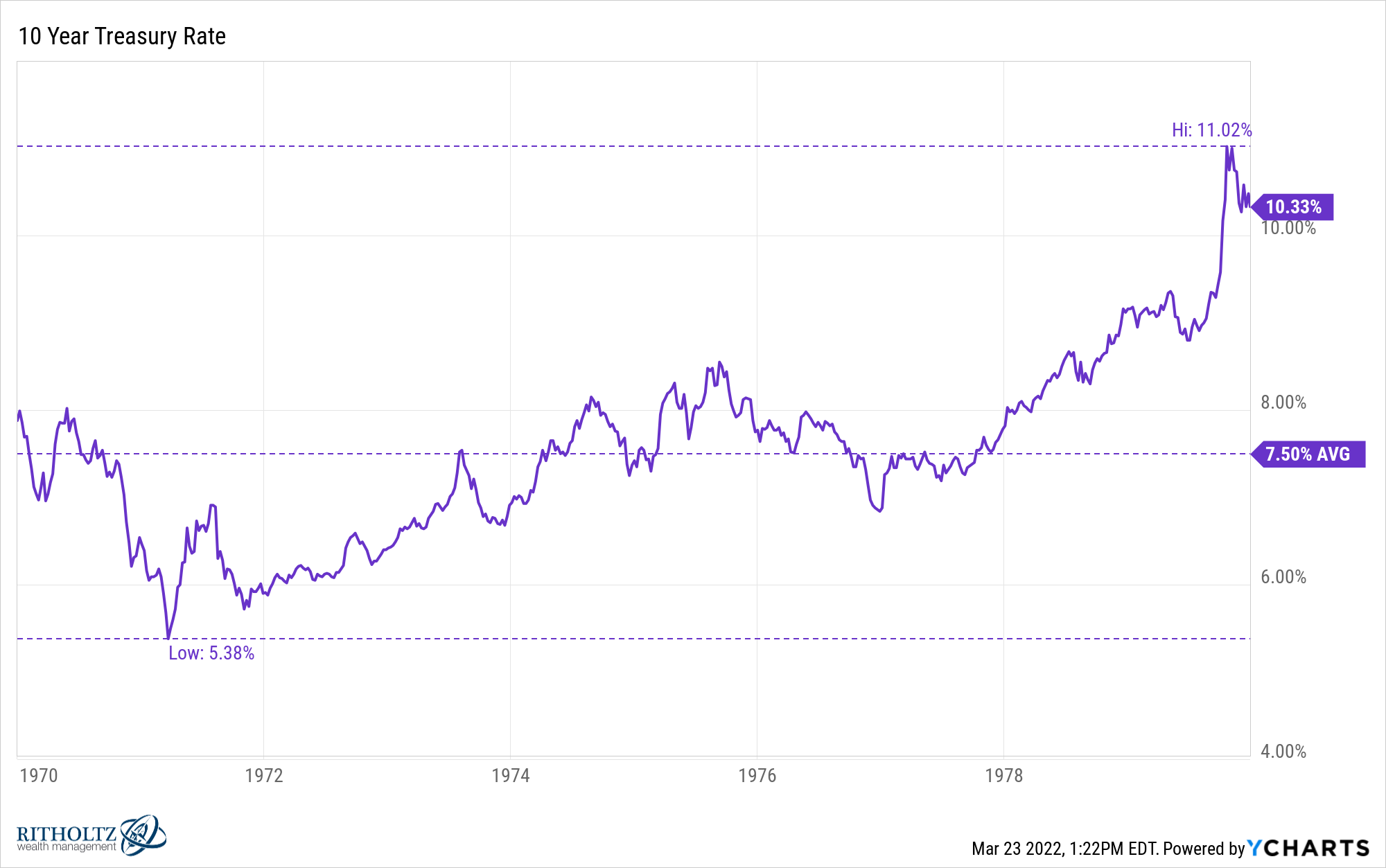 The 10-year Treasury yield never went below 5.3% in the ’70s. It averaged about 8% over that 10-year period and reached double-digit levels in the 1980s. The current 2.3% rate is nowhere near those levels.

The Fed funds rate range in the 1970s shows how strange that decade was from an economic perspective: 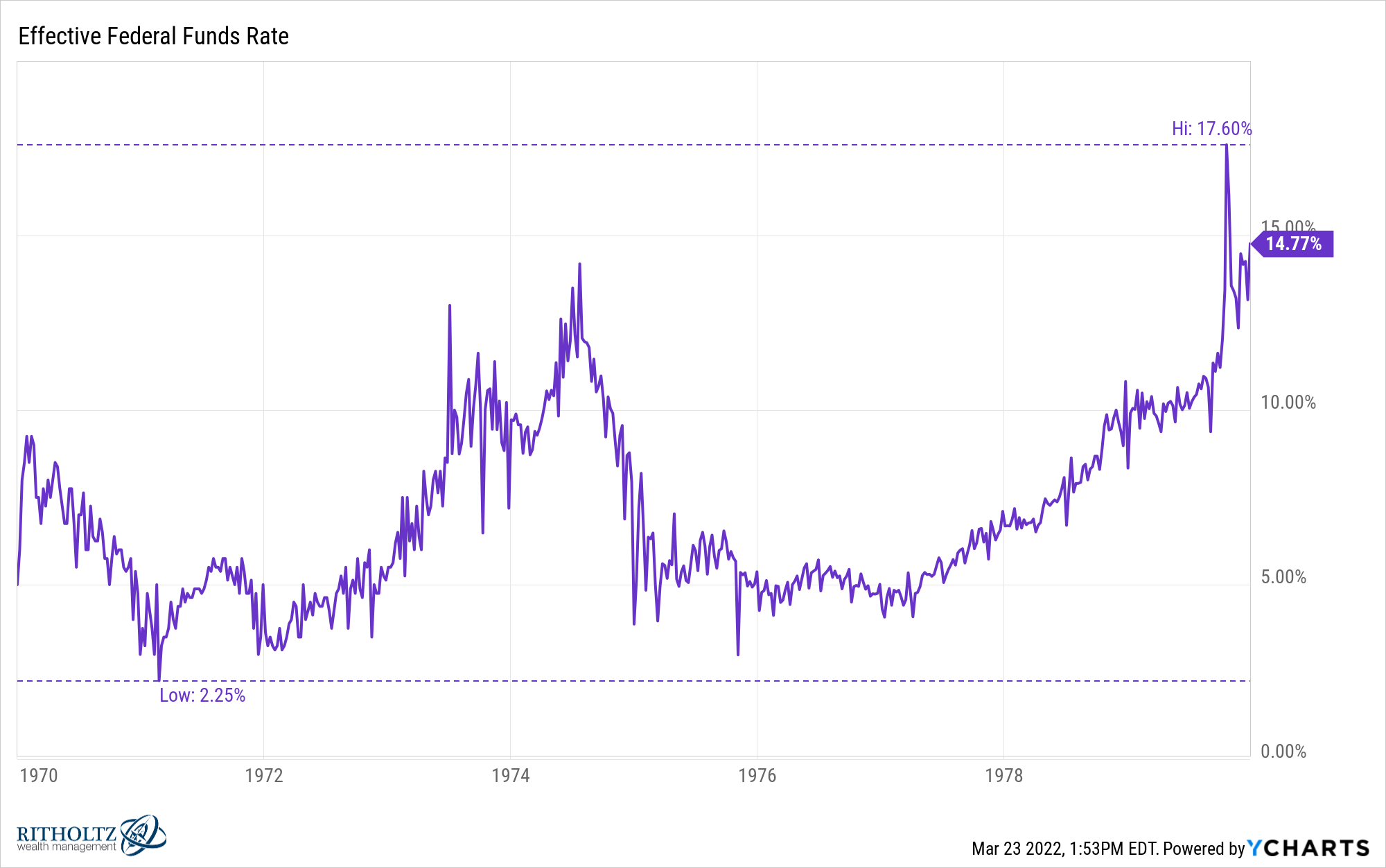 Inflation was already rising in the 1960s but the recession from 1969 to 1970 caused the Fed to bring down short-term rates to around 2%. That probably didn’t help inflation. By the time he raised rates to about 18% in 1979, it was already out of control.

The simple answer to what worked in the markets in the 1970s is commodities.

The GSCI index was up more than 20% per year in this decade. Oil jumped over 800%. Energy stocks rose more than 70% on an inflation-adjusted basis. Gold was up nearly 1,000% overall.1

The US stock market as a whole outperformed you on a nominal basis. The 70s are indeed one of the best decades ever in terms of income growth: 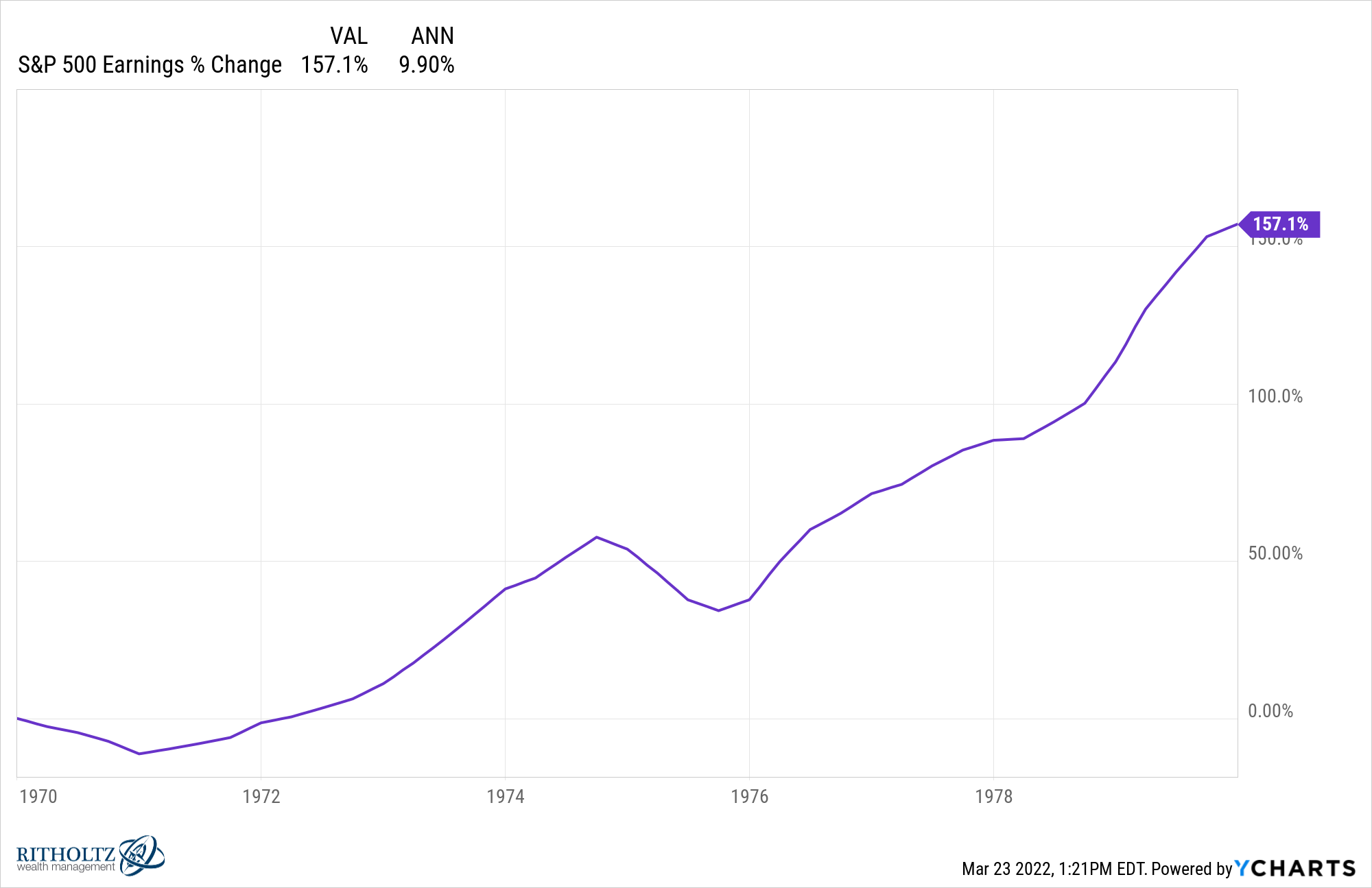 This makes sense when you consider that corporations raise prices in an inflationary environment.

The S&P 500 was up 78% overall, or about 6% year over year. This isn’t bad unless you consider that inflation was 7% per year, meaning the real return was negative.

The most surprising return from an asset class perspective may be how well cash performed.

In fact, if we compare stocks, bonds and cash going back to the 1930s, the 1970s was the only decade where cash beat both stocks and bonds at the same time: 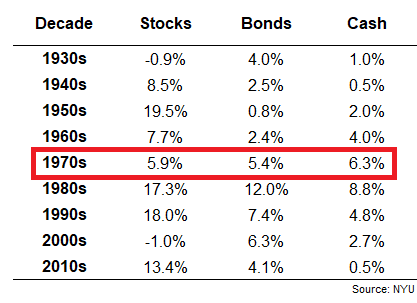 It comes back to the rate story again, then the yields are very high. You can see those high rates carrying bonds and cash during the 1980s, 1990s and 2000s as well.

Value stocks had their highest exposure to growth stocks in the 1940s and 1970s: 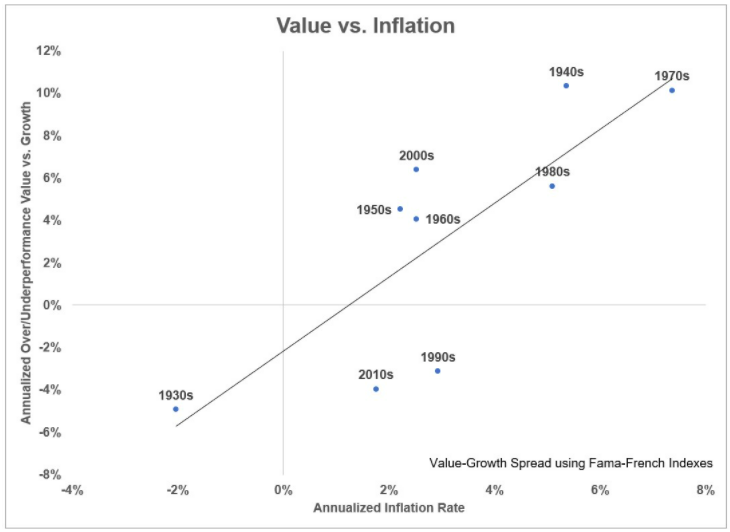 Value stocks are already outperforming growth in 2022 by a healthy clip. I don’t know if this relationship will last, but from a theoretical point of view it makes sense that prices would outperform growth when inflation is high.

Changing economic environment is a good use case for diversification – my favorite risk management technique.

There is another property that had its best nominal performance in the 1970s – housing. These are the annual returns for housing in the United States over a decade from Robert Schiller: 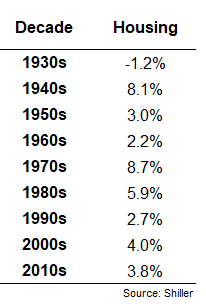 If you own a home, there’s a good chance it will be your best-performing financial asset this year (especially when adjusted for the effect of inflation on your mortgage payment).

As with all economic outcomes, I don’t know if the rate of inflation is going to go down. I cannot predict the future.

But the risk of stagflation appears to be increased relative to where we were before the pandemic.

We talked about this question on this week’s Portfolio Hedge:

Taylor Hollis also helped me answer some questions about setting up trusts and donor-aided funds.

1Although you could make the case a large part of the rise in gold prices in the 1970s, as Nixon suspended the convertibility of gold with the US dollar and allowed the price to float more freely.